Approximately one year ago one of the most dreaded and challenging periods in my life as a parent started: beginning solids with my son. The horror! Poor baby, tasting something that’s not milk for the first time, something that’s as bland and tasty as a piece of finely mashed cardboard and dealing with it coming back in the mouth after being swallowed. What is this green paste that resembles boogers? Why do I have to eat it when milk is so delicious? I perfectly understand, if I as an adult wouldn’t eat that, why would my son? And having to handle the little bowl of jar filled with unidentifiable stuff-that-babies-need-to-eat while aiming for a squirming baby avoiding the tiny spoon gets messy. Especially on the go: in the car or in pretty much any other place away from my somewhat comfortable home kitchen. Add in a toddler that needs to be attended as well besides the baby and it will hit the fan guaranteed. If I only knew about these 2 quirky items one year ago, my life would have probably been 26,3% better. 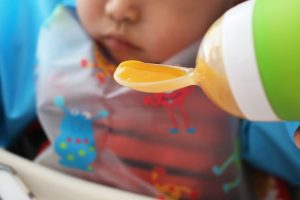 The first device is a baby spoon attached to a soft reservoir where finely mashed purees are squeezed directly in the small cavity. It’s especially useful for feeding 2 babies in the same time (think twins, if you have them you know the sound of one waiting for the other to be fed) as it eliminates the scooping time from the plate, but mostly it’s useful because, well, you don’t need a plate/bowl/jar anymore.  I was first looking at Boon Squirt, the first baby spoon of this kind, and while researching about it, the following aspects came to surface:

Our verdict: we love the concept, it’s simple and smart and lots of parents find it useful (85% thumbs up), however we decided that Munchkin Squeeze  baby spoon deserves the spotlight in Quirk Heaven. The Munchkin solved a couple of the above issues by designing a slightly wider pouring orifice and a flat bottom, thus enabling  vertical support.

The second quirky item is the Pulp Silicone Feeder. Here Boon had it right and created an almost perfect baby feeder: it’s soft and the holes are wide enough to allow chunks of fruit or vegetables through. Towards the tip the holes get bigger to ensure a better flow for the eager ones and it is especially designed to be grasped and handled by babies directly. This dispenser is also ideal for teething: filling it with cold or even frozen mixtures brings relief to the sore little gums. Not much more to say about it other than it costs just €8,5 and Oh just look at this baby! Cuteness overload!